14 Antonio Mastroberardino retrieves and spreads the bubbles of time 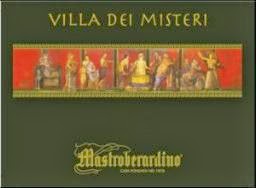 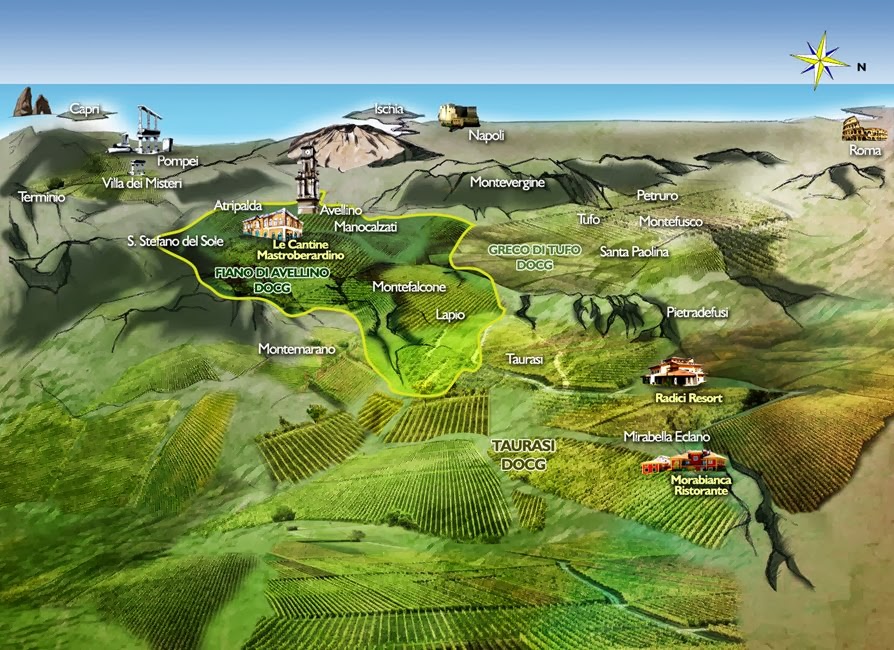 In the foothills of Mount Vesuvius lives and works a brave and foresighted historic wine-maker:  Antonio Mastroberardino.  When, after the 1914 and 1939 world wars, vineyards of inherited ancient vines were being pulled up throughout Europe to replant with modern varieties from America, which were in turn sprayed with the new DDT to prevent any of the pesky vine problems, Antonio stood firm and refused.  He loved his heritage of these ancient vines, through which he walked reading Pliny Senior’s Naturalis Historia, seeing how he could make his vineyards better by reverting instead to practices from 60 AD.   He knew he and Italy could not afford to lose this patrimony from his ancestors. 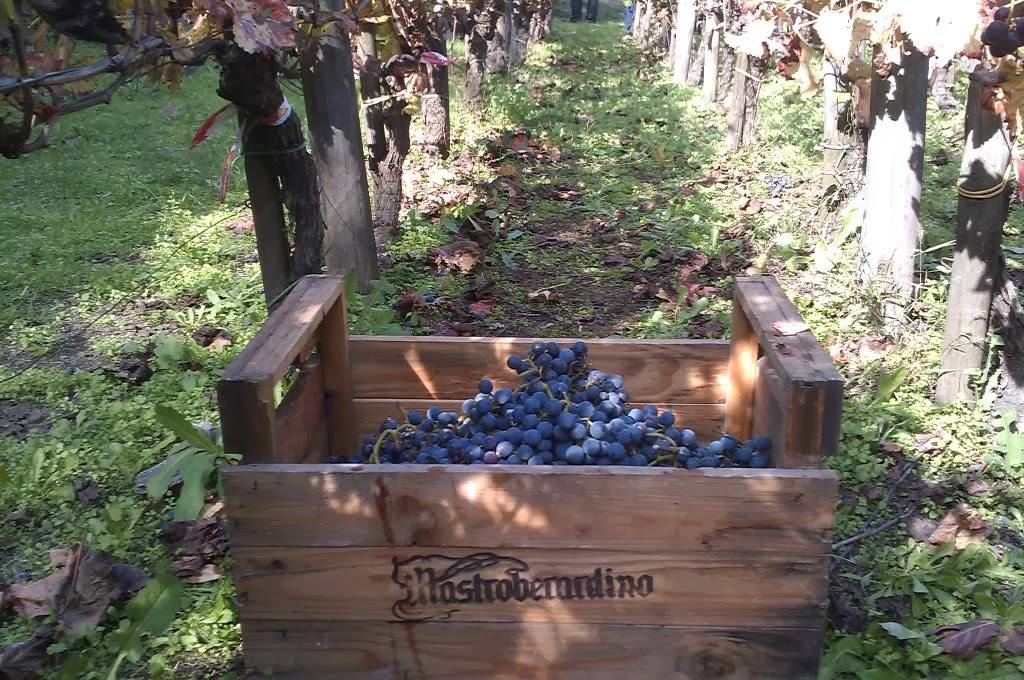 Going against what was considered to be the future was not easy, but gradually he made converts:  the wines were too delicious and unusual not to stand out; vines whose names showed their antique Latin and Greek DNAs, called Fiano, Greco, Aglianico, Piedirosso, Sciacinoso, Coda di Volpe, Falanghina, Falernian; all planted in the shadow of and thriving upon the tufo-rich soils of Mount Vesuvius.

By the 1980s his winery was standing taller and firmer amidst his blossoming vineyards.


In fact Antonio had been able to put aside from his profits enough to reconstruct and create a larger winery, using the technology he was inventing for his ancient varieties, over the current winery which had cellars dating from Roman times, from before Pliny Senior, the over-structure of which dated from the 1700s.

Then on November 23, as the harvest was fermenting, and Antonio was planning his new winery, all hell broke loose:  an earthquake of 7.2 magnitude, devastated 25,000 kilometers of Campania, killing 4900, injuring 7500, and leaving homeless 250,000, many of all these categories were neighbors and friends of the  Mastroberardinos.   This hellish devastation also destroyed the winery Mastroberardino was planning to renovate.


So what did Antonio Mastroberardino do?  A master of  how the present informs the future,  Mastroberardino gave what he had saved for a new winery to help alleviate the homelessness and sufferings of his neighbors throughout Irpinia, Campania.
(In the 1984 photo below Antonio shows a group how the destruction uncovered the Roman foundations under what had been his winery.) 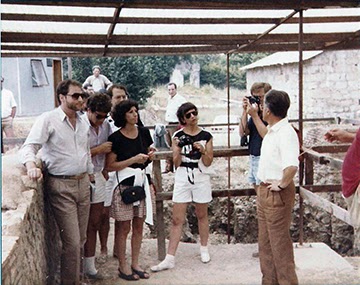 And this made him think even more about the past, and how it had created his present and future. While he continued developing his thesis of ancient ways in viticulture and in clonal varieties, making what was old new again, he turned to another site where Vesuvius had spewed destruction before: Pompeii.  In 62 A.D. a violent earthquake destroyed Pompeii.  But by 79 A.D. the city had been rebuilt better than before.   Then on August 24, 79 AD, Vesuvis erupted, covering Pompeii with lethal sulphur fumes, suffocating all.  Then it rained lava and pumice stones for three days, buying everything under tweny feet of mud and lava.   Having seen often in his rambles the uncovered and restored wine bars in Pompeii, Antonio knew that those Romans who used to walk these once-again streets were no different from any Campanian-Italians today:  they too loved their wines.
So, with the Ministers of Archaeological sites and of Agriculture, Antonio helped in the search for to find where those vineyards had been waiting for harvesters to arrive on that scorching August day in 79 AD.  Their searches proved to be correct, and, with DNA of the pits uncovered from 79 AD, Mastroberardino began his project of reconstituting those vineyards, planting them with those same varietals from the past (Piedirosso and Sciascinoso, inserting the same Chestnut wooden stakes inserted into the same post holes  from 79 AD, to support the vines.  And today, as you see in the photo below, several vineyards in ancient Pompeii are again thriving and producing wines.   What a moment that must have been for Antonio Mastroberardino, when he tasted that first harvest of Villa dei Misteri wines, the first taste of and from these vineyards in 1935 years; the first taste of wines made from vineyards that had never suffered the indignities of man-made and dispersed poisonous gases and destructive forces meted in war upon planet earth in all those years, protected by the destruction that buried them long ago; the first taste of a divinity of wines offering fragrances and flavors never experienced in 1935 years, that Antonio's work and faith in his friend Pliny was offering him.  And to us too, today.


Here  you see below workers in Pompeii vineyards.
And below that photo you see a group of us with Antonio in Pompeii before he began this project, in 1984, showing us found wine-bars. 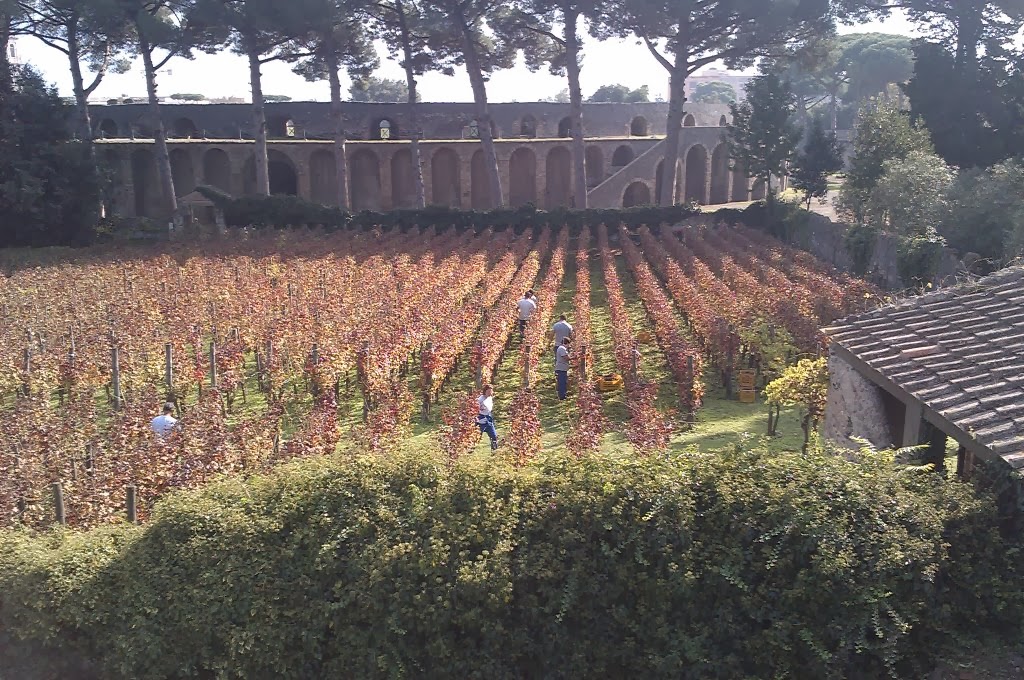 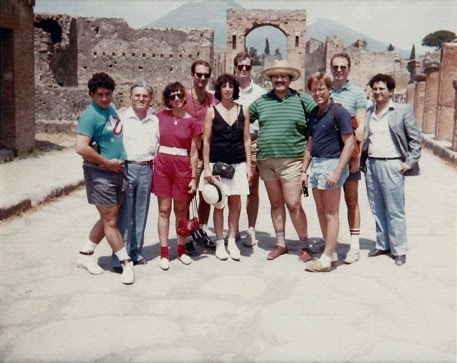 And below is the rest of the story.
Today Mastroberardino’s hundreds of acres of vineyards planted on the slopes of Mount Vesuvius, planted in ancient varietals most of us have never yet tasted, are certainly being inspired not only by the forward thinking of Antonio Mastroberardino's sons Piero and Carlo, but by his friend from the past, Pliny Senior.  If you look closely in the foreground of the photo below you will see an R2D2-like robot, a little SIAP.  This robot talks to his manifold companions situated throughout all of the hectares of Mastroberardino Radici estates, talking in their robotic language, telling Dr. Piero-Spock-Mastrobearino how the temperatures are, how the ground stability is, how the coming weather will influence, what the atmosphere is saying is all being relayed by these robotic friends of historic vines.   (Click on the photo to zoom in onto the face of the little robot) 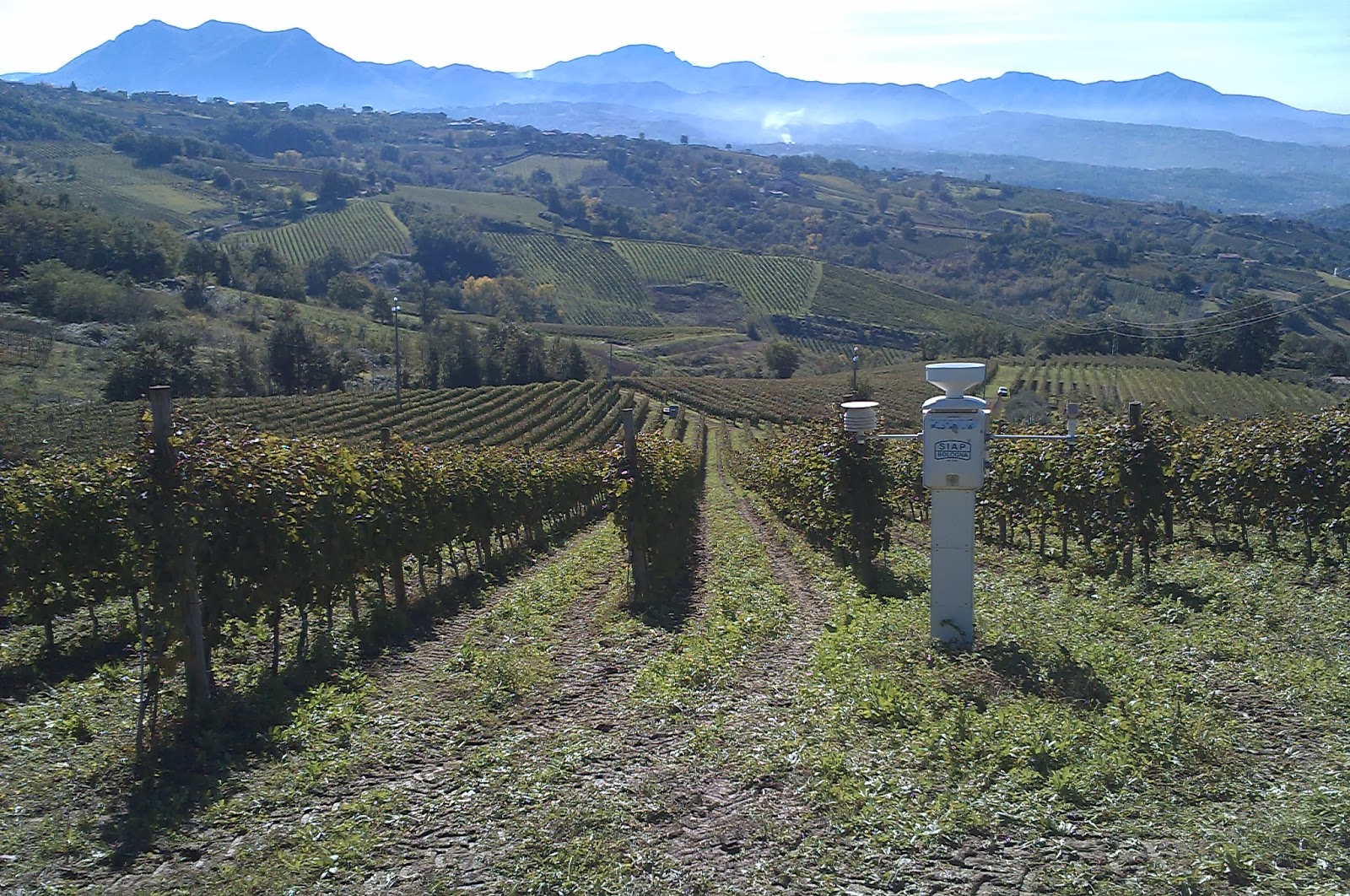 Long may Mastroberardino continue his planet-saving work in viticulture which influences so much of the rest of our lives.  Not only is Mastroberardino a great friend of Pliny Senior, but certainly of the god Dionysos. And therefore what he is spreading is Co2, The Gas of Life, that which makes us giddy when we drink Champagne.  Mastroberardino and his sons Piero and Carlo, are all truly Champagne.
Have you had your Fiano di Avelino today?
Have you enjoyed Falinghina?
Are you about to open a Mastroberardino Lacryma Christi del Vesuvio Rosso or perhaps the Lacrimyrosa?
What about Mastroberardino Taurasi?

POST SCRIPT:
Sadly, not long after this blog was first written,  on January 28, 2014, Antonio Mastroberardino went to meet his friend Pliny Senior.  Surely they will be chatting for many millennia about clones and varieties, about the past and the future, about Robotic vineyardists, about tastes, in their vineyards as well as those all over this planet, before they decide it is time to start with the other planets in the Universe.  Long live Antonio Mastroberardino and his pal Pliny Senior.
I had so longed to meet with him again in his Pompeii vineyards over a glass of Villa Dei Misteri.  I am sure one day we will.
In fact, in my mind's eye, I spent the last three years living in those vineyards with Antonio  while I wrote The Night Julius Caesar Invented Champagne.
So much of my book is a tribute to Antonio, his heritage, and his vines.
Thank you Piero for sharing with him my messages and book.
Antonio, if you liked this one, the sequel you will love.
Well we remember that first meeting in the United States with our guest, Wine Spectator's newest writer,James Suckling, in Yosemite National Park.  At the end of a wine-tastng and teaching weekend we were having a parting lunch, a picnic spread under the trees soughing in the winds alongside the Merced River.  Looking through the foliage at Halfdome Antonio said,”I feel so small in front of the sheer force of nature like is Yosemite.”   Antonio, you were a force for nature such as can raise us up to champion as you did your heritage of vines.  Long live the wines of Pliny Senior and of Antonio Mastroberardino.
Nunc bibendum est Appianum in toast to Antonio Mastroberardino without whom this world would be so small.
His loyal friend,
Maddalena.
Soon Commanding General Julius Caesar will stride onto this blog and make his vinous desires known.  Soon.  Just not today, Caesar.  Hush.

Coming: information on Mastroberardino's robotic VIVA labeling tool which will detect and report on the entire earth-sustaining life cycle of each bottle of his wines one purchases.

Posted by Champagne Everyday at 1:48 PM